This story is to discourage those who think that artificial eyes are not important, if person is bilaterally blind. The lady had phthitic eye after previous failed cataract surgery (done some decade ago). Her other eye is also blind, and also as a result of failed cataract surgery or whatever reason like uveitis was the cause. The left eye was painful, and very small.  And she desired it to be removed and artificial eye to be placed instead.

Evisceration was planned but found extremely difficult due to phthisis, and procedure shifted to enucleation. Conformer placed for three weeks, tarsorrhaphy applied for a week. Custom prostheses are unavailable, so stock ready-made artificial eye of medium size was placed instead. The result looks great cosmetically. And despite the fact that lady cannot see herself in the mirror, she is very happy, as the daughter nearby explains everything she sees.

P.S. I am not enjoying PMMA orbital implants for enucleation though, and motility with PMMA implants is superior after evisceration. 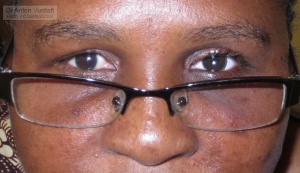 Eye prosthesis for blind patient. One will hardly find out, that left eye is artificial.