At our Lewanika Hospital we (or actually more our nurses than me) used to teach student nurses. I’ve just discovered in my archive these funny pictures. They document the pre-course knowledge of eye anatomy of student nurses. Ishh… These lashes must be painful! Sorry Mutinta, Faith Mundia and Nalishuwa 🙂 I hope, to this time you know the eye at least a little bit better. 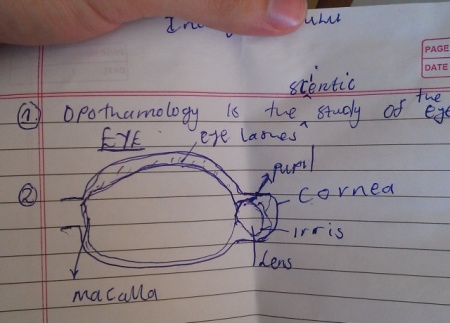 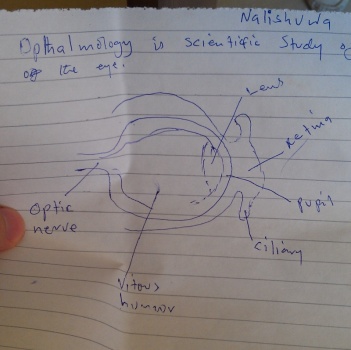 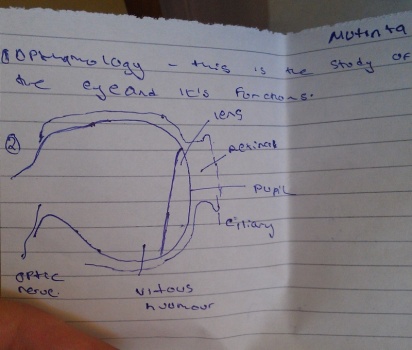 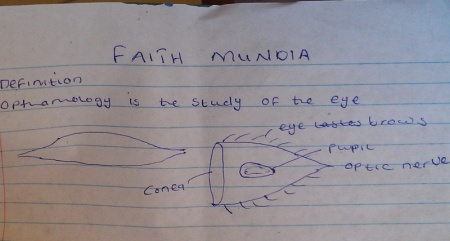 Which capsulotomy to use in SICS?

Manual small incision cataract surgery (MSICS) is a gold standard for high-volume cataract services in developing countries. Since recently (with the rise of global ophthalmology concept) it has become part of the best ophthalmology training programs in the US and across the world. It is an absolutely brilliant and gentle technique, which is especially suited for premature, mature and hypermature cataracts, as well as traumatic and congenital cataracts. But one can also apply the same technique to operate on immature cataracts. Here it won’t be so fast, as the aspiration of sticky cortex will take its time with Simcoe cannula. Nevertheless, all the stages are doable.

There are differences in capsulotomy diameter, which one needs for “normal” immature cataracts (~5-6 mm) and for hypermature cataracts (up to 9-10 mm!). In mature cataracts one has to use a dye (trypan blue), but also often to carefully decompress an elevated intralenticular pressure (which often fails and leads to capsular tear and/or “argentinian flag”-style tears)! This makes capsulotomy (and capsulorhexis as one of them) in mature cataracts more complex if compared to the one in immature “transparent” cataracts.

For MSICS I personally preferred mainly a so-called “can-opener” type of capsulotomy, as it is a) easier, b) faster, and c) safer. Once I had realized these benefits, I switched to this technique almost invariably. Can-opener is best for big mature nuclei and also for Morgagnian cataracts. I am, however, aware, that can-opener is almost always not a good option for phaco. At the same time I found continuous curvilinear capsulorhexis (CCC) technique in transparent (immature) cataracts pretty easy to perform in comparison to intumescent hypermature cataracts. However, CCC is also possible by MSICS on mature cataracts. One can do it through both a tunnel or a paracentesis. A tunnel offers greater maneuverability, a paracentesis offers more stable anterior chamber.

For CCC in MSICS one can employ a) insuline syringe needle, b) Utrata forceps (gives the best control over rhexis!) and c) McPherson tying forceps. The latter is non-toothed and is a sort of improvisation, when the correct forceps is inavailable (often the case in Tropics!). In this video I depicted typical variants of CCC by mature and hypermature (and intumescent and Morgagnian!) cataracts, both uncomplicated and complicated cases. The can-opener technique is presented in two cases here and also in the other video of this channel.

* Some of the videos were screened at the earlier stage of my MSICS career. Some of the capsulotomies depicted here could have been managed better, and do not necessarily represent the best possible surgical technique. After I had bought Utrata capsulorhexis-forceps during my trip to the USA in early 2017, I never used McPherson for this purpose anymore. So, I highly recommend to purchase Utrata early in your MSICS career. The video will however be a good one for the MSICS beginners in the tropics, who often have to tackle the complex intumescent lenses with suboptimal instruments, and who still have the right to do mistakes 🙂 I would anyways appreciate your (also critical) comments.

Those of you, who just start with MSICS – Keep it up!

What I have learnt from 2020 Paton Lecture

Global Ophthalmology Center at Wills Eye Institute organizes annually a great talk of international experts in global (tropical) ophthalmology. With a great pleasure I have seen a lecture yesterday from Dr. Bendjamin Roberts, a US-trained ophthalmoligist and VR-Surgeon, who is working in Kenya’s Tenwek Mission Hospital since 2006! I also enjoyed the reports of Wills’ residents, who travelled abroad to Haiti and Kenya (to Dr. Roberts) for a several weeks short-term programs.

So, what have I learnt from their experience?

1) There are numbers of western guys, who are working globally in tropics, and of whom I had unfortunately no idea. The rich experience depicted by Dr. Roberts impressed me much.

2) I especially enjoyed the story of building the brand new eye department and making it eventually self-sustainable and multi-specialized.

3) I learnt that people in this region of Kenya, unlike those in Western Zambia, may afford surgeries, which cost $200 (MSICS) or 500$ (phaco) per eye. In comparison, the cost of one MSICS surgery at our department was about 25$, which actually allowed to renew consumables but nothing more.

4) I learnt that the number of residency programs in the US, that offer global ophthalmology experience to their residents, is growing. It is now 9! Several years ago it was about 2. Unfortunately we in Russia are far from this. I know of not a single residency in Russia that offers such experience for our residents.

5) I have seen for the second time the western ophthalmologist who settled in the African country with the family including several kids. Both of them are from Mission Hospitals. Perhaps religion helps also in this regards.

COVID-19, a thought of the day

It’s sad to realize how ignorant a western community was and is when it comes to ebola, HIV, TB and malaria African epidemics, eliminating annually the whole layers of population. And how suddenly important epidemics become when the seek persons walk around the BBC and CNN headquarters. Define “hypocrisy“…