This is a young lady of 32y complaining of reduced vision in both eyes since the beginning of the year 2017. The vision reduction is mild to severe 6/24 in RE and FC@1m.

On external examination, adnexa normal, and no signs of regional lymphadenopathy.

Anterior segments are normal, and no signs of active or any previous anterior uveitis in both eyes. 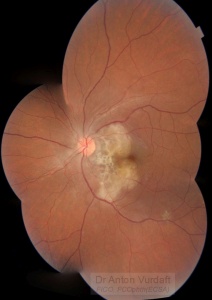 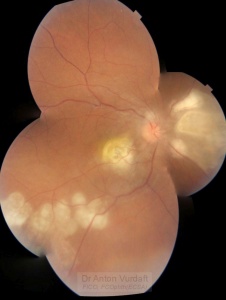 Four lesions in the right eye fundus are suspicious for tuberculomas (macula, nasal peripapillary area and temporal mid-periphery) with the size of one to three disk diameters. Nasally to the disk there is a lesion of three disk diameters, suspicious for choroidal abscess. Infero-temporal vascular arcade contains multiple one disk diameter grey lesions suspicious for serpiginous-like choroiditis, some of them are coalescent. Gross optic nerve and peripapillary retina edema is obvious via ophthalmoscopy and OCT.
Left eye demonstrates confluescent peripapillary choroidoretinal infiltrate, more pro-nounced temporally and involving fovea nasally, reaching vascular arcades superiorly and inferiorly. Punched-out white-yellow lesion seen superiorly in posterior pole and along infero-temporal vascular arcade, suggestive of choroidal tubercles.
Both eyes show no signs of periphlebitis. No vitritis signs were present in both eyes until last few days (preretinal vitritis develops in RE posterior pole close to the vitreoretinal fibrotic adhesion). 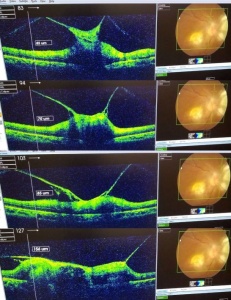 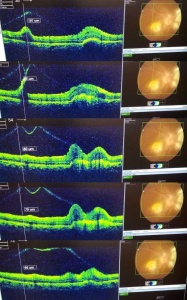 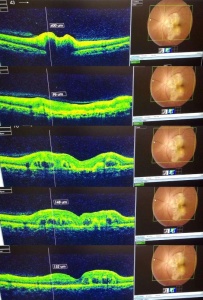 OCT of the left eye suggests optic nerve and peripapillary swelling, and outer retinal layers swelling. OCT of the right eye suggests vitreoretinal adhesion at the level of presumed macular tuberculoma, and peripapillary swelling of retina in outer layers and choroidal lesion.
Her RPR result was found negative for syphilis.
Her sputum PCR test (Gene Xpert) was found negative for TB.
Her CXR is not characteristic of PTB.
Her liver and kidney function tests were normal.
Her vitreous and aqueous tap PCR analysis (Gene Xpert) found negative for TB.

The fundus picture and history is not suggestive of sarcoidosis or cryptococcal choroiditis, but ACE analysis is planned for. 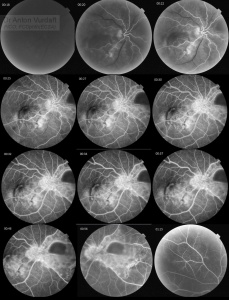 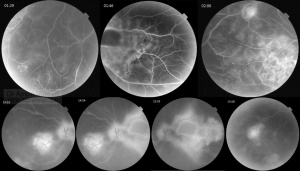 Lauren A. Dalvin, Wendy M. Smith, “Intraocular manifestations of mycobacterium tuberculosis: A review of the literature”, Journal of Clinical Tuberculosis and Other Mycobacterial Diseases, 2017