I am about to start uploading my pictures collection to the website. Starting from today these posts will randomly reveal interesting pictures from 2014-2017.

First is traumatic anterior staphyloma, male 60 yo. Undergone plain evisceration in December 2015. That time, no implant was used for one or another reason. Note the tape over his left eyebrow. This is meant to caution the nurse and the surgeon to operate on this, and not the other eye. Imagine, the cases of wrongfully amputated eyes are described in the literature! 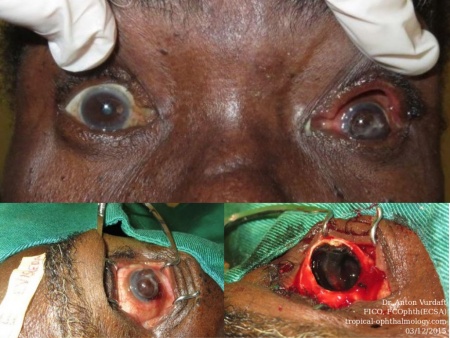 Of note, the golden standard for oculoplastic surgeons in such cases is evisceration with orbital implant. It provides better motility and appearance. See Comparing outcomes of enucleation and evisceration (Ophthalmology, 2006) for reference. Most oculoplastics textbooks would agree. The whole procedure is performed under local anesthesia (retrobulbar lignocaine). Variances of techniques for evisceration are known. The way with posterior incisions in scleral cup and separating optic nerve from the scleral cup are superior, as they provide the surgeon with more space for the bigger PMMA (in this case) orbital implant.